This post is part of a series about LEGO Heroica. Part 2 looks at the pros and cons of expanding on the RPG nature of Heroica in the custom rules. At the bottom of this post are links to the other parts.

A LEGO RPG - what could be cooler!?  When Heroica was first released, that's what many people thought it was.  Unfortunately, Heroica was (at best) an RPG-lite, but this being LEGO, and LEGO being all about customizability, that didn't stop anyone. 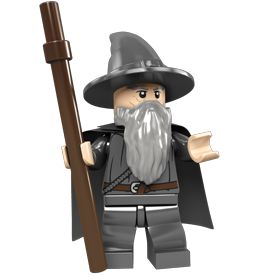 One of the most common RPG elements added to the game is leveling.  Under such a scheme, players gain XP for certain actions they undertake, be it exploring, looting, or (most likely) killing monsters.  Once players reach certain XP thresholds, they level, and thereby gain in some stat, like +1 health, +1 movement, +1 damage, or something like that.

*PROS - Leveling adds a lot to a game, and it helps you feel vested in your character.  Actions that you undertake now can have consequences for your character later, so you take pains to think ahead and maximize the XP for your microfig.  Leveling also adds much-needed complexity to Heroica, and makes it feel much more like an adult board game as opposed to a child's toy.

*CONS - Leveling by itself cannot exist in a vacumm; in other words, if you add leveling, you need a reason to add leveling.  This usually pans out with a final boss who is too powerful to kill without a high-level character.  Unfortunately, this can lead to all sorts of balancing problems, and if the mechanisms by which a player can level up are limited, then a few fortunate dice rolls could hyper-level one or more players, leaving the rest of the players in their dust.  Leveling might also create a singular best path to victory, which would reduce the diversity of the game, and see players following the same strategy again and again.  This requires a lot of playtesting to perfect, which can be very time consuming process.

This is another extremely common RPG element added to the game.  When playing with classes, it essentially diversifies the player characters.  Instead of being different just because of their Ranged/Melee attack, the characters might have more unique abilities, certain stat differences (see leveling above), or get different bonuses from different items and weapons.  For example, because a ranger already has a ranged ability, having the bow might let him use the ranged ability on a die roll of 3 or a shield, whereas other classes can only use the ranged ability if they have the bow and roll a shield.

*PROS - Classes make each character unique, and if you add some mechanism of randomly assigning classes to players, it increases the replayability by increasing the diversity of playing styles.  By changing the different benefits of each class in combination with varied map layout, you can give each class a beginning, middle, or end game benefit.  If you expand the player-selectable actions, and reduce the determinism, the differences between the classes can lead to an interesting back-and-forth horse race, with certain classes only getting there second wind at the last second.

*CONS - Like leveling, classes add complexity to the game, and can put an undue burden on the players to memorize (or at least familiarize themselves with) the pluses and minuses of each class, and play strategies for each class.  Also, classes create a balancing burden.  This can be more pronounced if classes have certain abilities or needs that compliment or damage one another.  For example, if the map has a limited number of mana potions, then a game with multiple magic-using characters could find those players disadvantaged against a singular combat-based character.  If PvP combat is allowed (see below), then some classes might be at an advantage if their attacking rocks-paper-scissors class is missing.  I think that classes, more so than leveling (and especially when combined with leveling), make balancing a nightmare without making everyone the same.

One hallmark of World of Warcraft is the player vs. player and arena-based combat system.  The beauty of PvP is that your enemies, instead of being algorithmic drones, are actual human beings who can think and adapt to best counter your strategies.  In a turn-based game (like most board games), any PvP aspect will be minimized, but it doesn't mean it can't exist.  For example, if you allow PvP, players may opt to essentially use their turns to specifically target the other players.  This makes the game more aggressive, and allows for more politicking between the players in a meta way.

*PROS - Like I said above, PvP greatly expands the pool of enemies, and increases the average skill of those enemies.  It also adds direct conflict between players, which, in my view, is much more desirable than the indirect conflict that exists in normal "go around a map" board-games.  PvP can also be combined with traitors to add a lot of suspense to the game:  you know one of your fellow players is the bad guy, but who!?

*CONS - Unfortunately, some of PvP's greatest strengths are also its greatest weaknesses.  In PvP, not only are you fighting to win, you are fighting for others to lose.  The distinction is important, because it means that newbie players could be at a strong disadvantage if they don't plan ahead to protect themselves from PvP attacks.  In a game like LIFE, where you are simply trying to go around the board, it really doesn't matter what the other players are doing, unless they win.  In PvP, their actions are very important, and that can overwhelm a new or casual player.

One of my favorite things to do when playing any RPG is to complete all the side quests.  In particular, there is nothing quite as satisfying as racking up hundreds of hours in Morrowind trying to get high ranks in all the major orders.  If you think of an RPG like a painting, then questing is the canvas that holds it together and gives it shape.  It's truly the trials and tribulations of the make-believe world, as opposed to any other characteristic, that sucks you in and makes you believe you are part of a larger universe.

*PROS - Questing is a great tool for adding compelling game-play. With various side quests, there is likely something that every player will find attractive.  Questing also provides a way for players to get gold, experience, and items, which helps them with fighting the final boss.  This allows for higher variability, which translate to higher replay-ability, which ultimately leads to higher game-play satisfaction.  If you couple questing with a variable game board, you could have certain rooms having quests, and these quests could change dynamically as the board is recreated for each game.

*CONS - However, questing is not a trivial matter.  Inherently, players are already on the quest of beating the game, so side quests  must detract from that core quest.  Yes, they can add to the overall game-play, but they distract from the true goal at hand.  Questing risks confusing players, adding unnecessary complication to the game, and greatly extending play-time.  Furthermore (though this is not necessarily all bad), if the side quests are more interesting or compelling than the main quest, then the finale of the game might be sort of anti-climactic.

In summary of my comments above, RPG elements add great depth to any game, and this translates into stronger replay-ability, more variable game play, and greater player interest.  I know that any game that I make with Heroica will have RPG elements.  Even though there are cons (see below), the benefits completely outweigh any detriments, and if properly included, will make the game nothing but better.

Many of the cons are simply the other side of the pros coin.  RPG elements increase the complexity of the game, lengthen the play-time, and increase the mental investment in the game.  However, all of these cons are simply the price to pay for the kind of game I want.  I don't want to see a game that is short, simple, and doesn't connect with players.  In my view, complexity is just part of making the game a truly enveloping experience for the players.
Heroica: Build-a-Board Game (Part 1)
Heroica: Dungeons, Dragons, and Microfigs (Part 2)
Heroica: Hack-n-Brick (Part 3)
Heroica: Building at House on the Hill (Part 4)
Posted by Nicholas Card at 5:32 PM